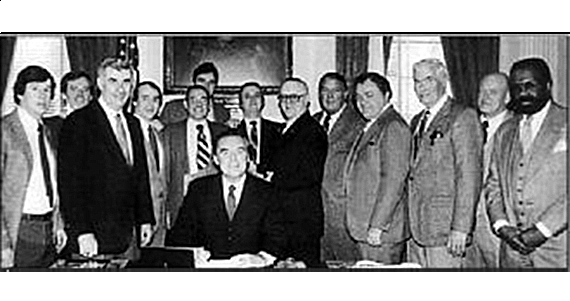 On March 23, 1979 at Florian Hall, Hallet Street, Dorchester, MA, a meeting of the rank and file Detectives of the Boston Police Department was held (all but three (3) detectives were in attendance). This meeting was the first of many to establish a “social group” and what is known today as the Boston Police Detectives Benevolent Society. Many discussions were held at this meeting regarding the formation of the Boston Police Department Detectives forming a “social group”. A motion was brought to the floor and voted on to form the Society. A governing body of Detectives was appointed until an election could be held. Detective Robert Chenette, Organized Crime Unit was appointed as the first President of the Society. Detective Donald Vernerin, Intelligence Unit, was appointed Vice President. Detective Jack McCormack, Vice Control Unit was appointed Treasurer. Detective Eddie Miller, Suffolk County District Attorneys Office was appointed Secretary. The first Board of Directors was also appointed Detective Frank Sheehan, D4, Detective Stephen Murphy, DCU, Detective Richard Driscoll, D4, Detective Salvatore DeLuca, D3, Detective Joseph Carr, ID, and Detective Robert Cunningham, TPF. The Boston Police Detectives Benevolent Society was registered with the Secretary of the Commonwealth of Massachusetts. BPDBS with a mailing address of PO Box 320 in Jamaica Plain. The Motion was voted on and affirmed with one opposed vote by Roy Prout. After the formation of the “social group”, in May 1979 the BPPA, which members were still a member of had encountered some hostility from the BPPA then President, Chester Broderick. This animosity led to a formal vote to leave the BPPA, and on April 5, 1982, by secret ballot and with 167 votes cast and 150 of those ballots being cast to officially form the Society, 14 votes in opposition, 2 voided votes and 1 blank vote. Boston Police Detectives succeeded from the BPPA. With the newly formed Society, the Superior Officers with the rank of Detective, who were members of the Superior Officers Federation, discussed leaving the Superior Officers Federation. A letter to then appointed President Daniel Mahoney stating their interest in being a separate division under the BPDBS. President Daniel Mahoney then sent a petition to the Labor Relations Board on behalf of the Superior Officers with the rank of Detective requesting that the BPDBS become the collective bargaining agent of the Superior Officers with the rank of Detectives (Captain Detectives, Lieutenant Detectives, Sergeant Detectives).